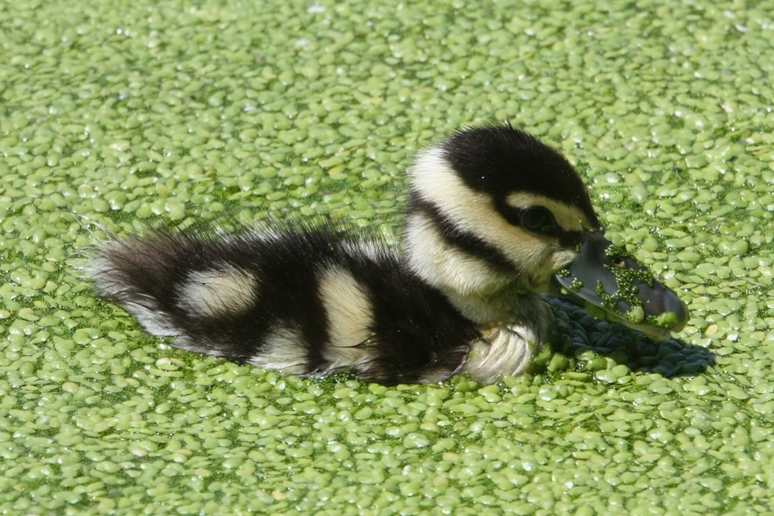 Duckweed is one of the most common pondweed problems. They grow quickly and takes a little time to cover up the whole pond.

Although, duckweed is a portion of good natural food for some fish species, if present in excessive amounts, it can hart the pond environment and its habitats. Therefore, controlling their population is a must.

There are several methods of controlling and removing duckweed in a pond or lake. In this article, I will talk about some of the easiest and effective methods that you can apply to get rid of duckweed in pond.

7 Ways to Control Duckweed in Pond and Lake

There are many species of fish that feed on aquatic vegetation. But not all of them are effective for duckweed control. This is because most of them will not eat duckweed if they got enough supply of other normal food. 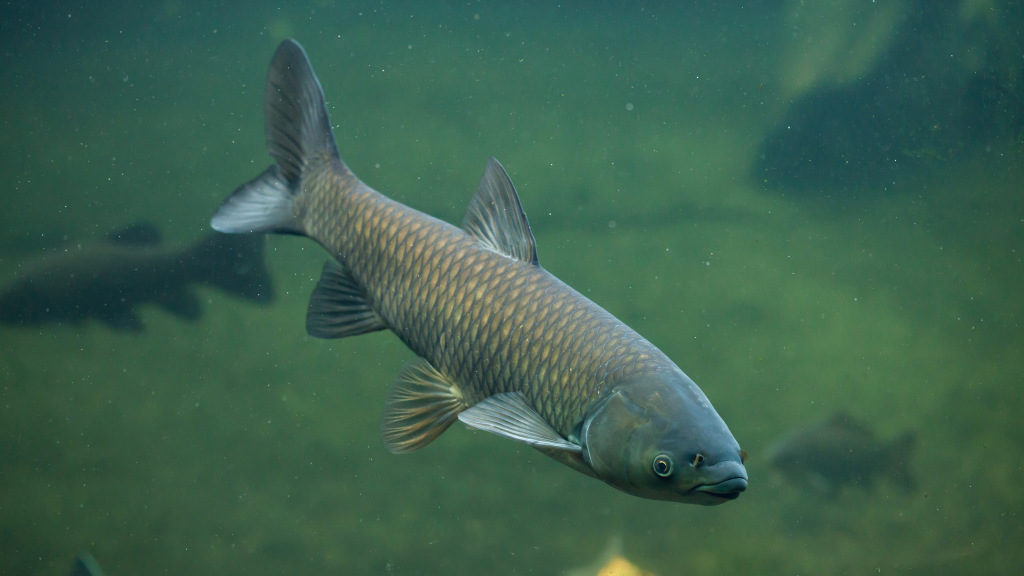 Grass carp is the most popular species of fish for aquatic weed control. They primarily feed on aquatic plants. Grass carp can eat up to three times their body weight per day. 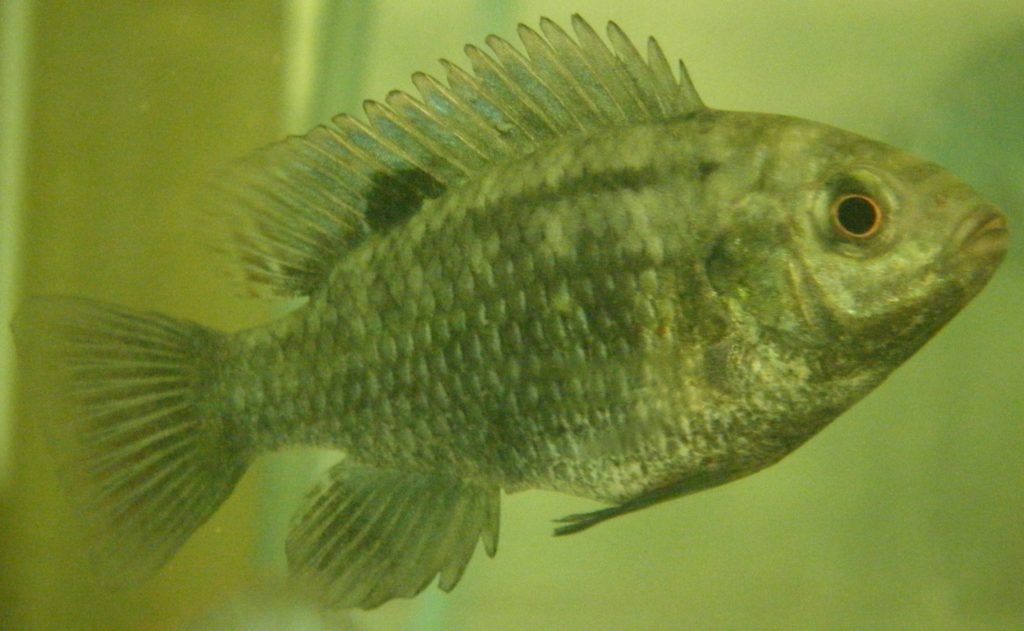 Stock up to 30 pounds of small tilapias in one acre. You might also need permission from the eligible authority for stoking tilapias. 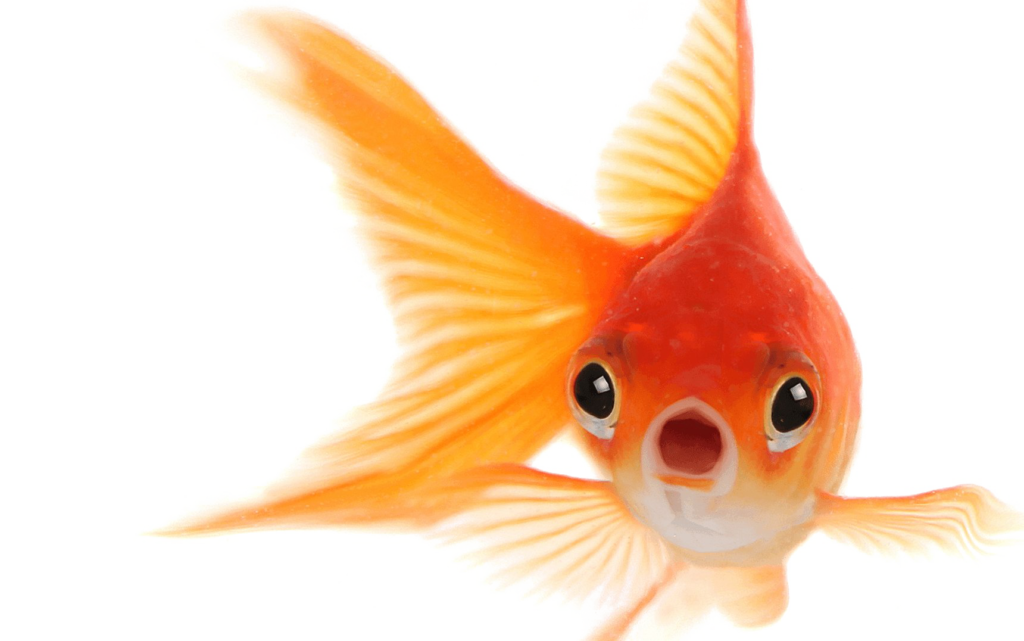 If you have a small garden pond then you can have some goldfish in it to control the duckweeds. Duckweed is a favorite food of goldfish. Once you stock some of them in your garden pond, they will finish any duckweed or watermeal.

Most of the garden pond owners stock koi fish for their beauty. But koi is also good for controlling duckweed in a pond.

You may also find that your koi don’t eat duckweed at all. The reason is simple – they aren’t hungry enough to eat duckweed. What you can do as a solution is to cut their regular food supply to some extent. They will surely eat up the duckweeds.

Have Some Domesticated Duck For Eating Duckweed 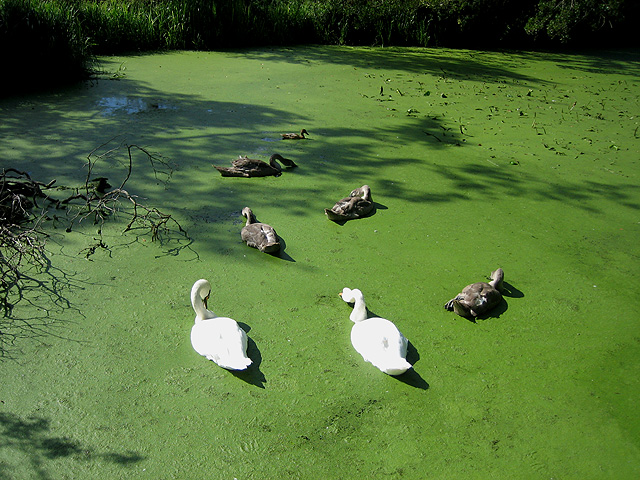 Do you know why we call it duckweed?

Because duckweed is the favorite food of duck. Also, wild duck is the source of duckweed in your pond as I have told you earlier.

If you have no problem with keeping ducks, then you can have some domesticated ducks in your pond. The ducks will keep in the population of the duckweed in a tolerable limit and you will also get some eggs for free. But don’t forget to feed your duck some extra food twice a day. Also if you have small fish in your pond, you have to think twice before you release the ducks. Ducks can eat them up also.

Use Floating Drag Rope or Net to Collect and Remove Duckweed

If you want to remove duckweed from a large pond or lake, you can use floating drag rope or net. It is an effective and efficient method. This is also very cost-effective and you can make the rope at home.

First, place the rope near the shoreline and close the loop. Then slowly decrease the area and the duckweeds will be dense in that small area.

After that, you can remove them by hand or pond net. Make sure you put the duckweeds far from the pond so that they don’t come back to your pond again. 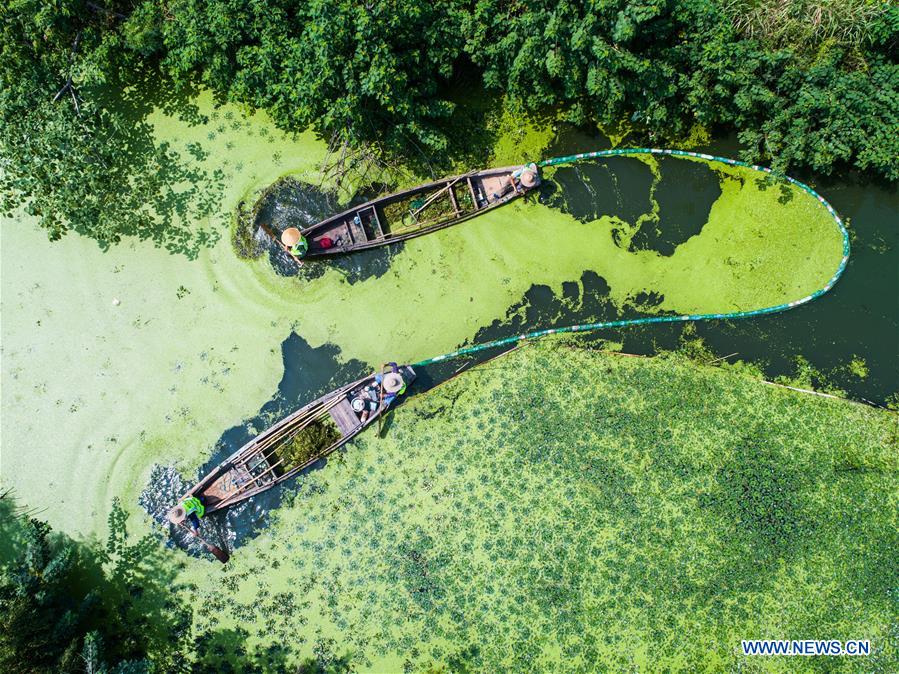 Use a Pond Net to Collect Duckweed For Your Garden Pond

If you are a small pond owner, you can adopt this method. Use a pond net or pool leaf collecting net for collecting the pondweeds.

Here the wind can help you. When the wind blows, the duckweeds are gathered in one place. From there you can collect them.

When you select a pond net, go for the large one. It will make the job easier.

Use a Mechanical Duckweed Skimmer for Skimming Out Duckweed

Mechanical pondweed skimmer is a motor-driven pond skimming system. It is efficient and eco-friendly.

The working mechanism of a surface skimming system is straightforward. It pumps out the surface water from the pond along with the duckweeds. Then the water goes through a strainer. The strainer separates the water from the duckweeds or any other solids. Then the clean water again goes back to the pond.
You can use a surface skimmer if you have a large pond and budget.

The regular pond skimmer is installed outside of the water. Water is pumped out of the pond and sent to the skimmer. The strainer or mesh separates the duckweeds from the water.

The floating skimmer is placed at the pond. When it runs it pusses the surface water through it and the floating duckweeds are strained in it.

Use a Parachute Skimmer for Collecting Duckweed

Parachute skimmers are newly introduced and an easy to use tool for duckweed removal. It has mainly three parts. The mesh screen that retains the duckweeds. A floating device keeps it above the water. And the rope is used to drag it to the shoreline.

This tool is very easy to use. All you have to do is to throw it to the water with pondweed and drag it to the shore by rope. Then you have to collect the duckweeds from the mesh.

Parachute skimmers can be 3 meters wide. You can use this for the effective removal of duckweed in small and medium ponds.

Use Chemical Herbicides That Will Kill Duckweed

Many aquatic herbicides are available that works effectively on duckweeds. I recommend the following herbicides that are tested by the MDC. You can get a pdf copy of their duckweed and watermeal control guide here.

Sonar AS is a trading name. The chemical name is Fluridone. It is the safest aquatic herbicide that you can use to kill the duckweed in your pond. Sonar AS doesn’t bring any harm to the pond environment.

The application rate of Sonar As is .25 to .5 Gal per surface acre or as per the manufacturer recommendations. There is no restriction on fish consumption and water use of livestock and swimming.

One of the fastest ways to kill the duckweeds is to use Reward or Weedtrine-D. Reward and Weedtrine-D are the trade name and the chemical name is Diquat. The action is fast as duckweed absorbs it quickly.

The rate of application is 1 to 2 gallons per surface acre of 2L or as per manufacturer recommendation. There is no restriction on fish consumption. But you have to wait at least 5 days to use the water for irrigation, domestic and cattle use.

Cutrine Plus is Copper Ethanolamine Complex. It is widely used in fish ponds and hatcheries for controlling algae and duckweed. It kills duckweed by braking the cellular structure.

If you have trout in your lake or pond, then you have to be cautious while using it. Because of the carbon hardness of water is less than 50 ppm, it can be toxic to trouts.

Before you use any aquatic herbicide in your pond or lake, make sure it is safe and don’t use a overdoes.

How do you get rid of duckweed naturally?

The natural duckweed control method works best when the population of duckweed isn’t very high in the pond. You can follow the following preventive measure to get rid of duckweed naturally.

Vinegar can kill some types of pondweeds and algae. However, it is not very effective for duckweed. Although vinegar is safe for fish and other pond habitats, you shouldn’t use a large amount of it at a time in the pond. That can be harmful to the fish. So it is not a good way to control duckweed with vinegar.

Should I remove duckweed?

Is duckweed good for a pond?

Duckweed is good for a pond for many reasons when they are present in a moderate number in your pond. Some of the benefits of duckweed are –

Does duckweed die off in winter?

Yes, duckweed dies off in the cold weather. But there are some species of duckweed that can produce spores. These spores can survive the winter and produce new duckweed when the winter is over.

Does barley straw get rid of duckweed?

Barley straw doesn’t directly kill duckweed. But it works to some extent to keep their population in control. therefore, it can be a good way to control duckweed in a pond.

How do I get rid of duckweed in a large pond?

Why is duckweed bad?

Excessive duckweed in pond and lake are bad for a number of reasons. They create the following problem –

How fast does duckweed multiply?

Duckweed grows really quick. It enough nutrition is available in water it can divide once a day. A couple of duckweeds can cover the whole pond within one and a half months.

Although duckweed will not directly kill fish, its long term effect can result in fish death. It can heavily contaminate the pond water and create a lack of oxygen in the pond water. This can lead to fish death. Also, this facilitates the housing and growth of disease creating organisms that can cause fish death.

Duckweeds are any good for oxygenating water. As duckweed are floating pond plants, the oxygen they deliver goes directly to the air, not in the water because photosynthesis occurs in the upper layer. For oxygenating pond water, submerged pond plants help the best.

Where does duckweed come from?

Many pond owners wonder, where did they end up getting so much duckweed in their pond when they haven’t released any duckweed themselves. But duckweed can migrate to your pond in many ways that you might not think of. Like –

It is better you prevent duckweed from entering your pond rather than controlling and removing duckweed when they have covered up your pond. So, take the necessary measures so that you don’t face this problem in the future.

I hope these methods will be helpful for you for duckweed control.