As a pond owner, it’s important that you know about freshwater clams.

Clams are an essential part of a healthy ecosystem, but they can also be destructive to fish and other aquatic life if not managed properly.

Freshwater clams are filter feeders, meaning they eat algae and bacteria from the water column. However, when it comes to their diet, these creatures have some pretty specific needs.

In this post, we will talk about everything you need to know about keeping freshwater clams in your pond.

Freshwater clams are known to act as natural filters that keep the water clean and clear. They are a member of Phylum Mollusca.

Freshwater clams are vastly used for man-made tanks and aquariums mostly that help to clean the water. Although it is not the ideal solution for ponds and here is why –

Not all the species cause problems to your pond, but some of the clams like Corbicula, the invasive Asiatic clam, can create a mess in your pond system. Many pond owners have said that freshwater clams create more waste than the good they provide.

Adding new species like freshwater clams in your recreational pond might bring some unintentional consequences which will block the positive outcome.

When the algae get filtered out by freshwater clams, the food chain of a pond breaks down. It reduces the growth of the fish in a pond. when the water is more clear, more light will reach the bottom of the pond and it will enhance the growth of weeds.

Things To Know Before Adding Freshwater Clams In Your Pond

Pond enthusiasts are always trying to add new species to their recreational ponds. There are many discussions about freshwater clams in ponds and to summarize that, I’ve gathered some information for you –

Advantages of Keeping Freshwater Clams In Your Pond

Freshwater clams are known as a very friendly species. They are peaceful and non-aggressive filter feeders. They clean your pond water and helps to remove debris from tank water.

Freshwater clams can live with other animals in your pond with really friendly behavior and they are a great conversation starter. Adding them sometimes is beneficial to shell crackers in your pond as they often eat clams.

Disadvantages of Keeping Freshwater Clams In Your Pond

Freshwater clams can die soon when placed in a pond or tank. When they die, their decomposing bodies will damage the water quality severely and create a bad environment for the living things in your pond. It also creates bad smell, ammonia spikes, and milky-white cloud water. Sometimes it gets difficult to notice their dead bodies as they stay buried. Freshwater clams remove algae from your pond which breaks the food chain there. As a result, the abundance and growth of fish go down.

A freshwater clam should have its shell closed or slightly open and tend to rest at the tank bottom. When freshwater clams have their shells slightly open, you’ll notice their inner tissues which are white or off-white and with hints of slight beige and pink.

If freshwater clams have their shells widely open or the inner tissues are not seen, then it may be unhealthy or dying. Their shells will likely close immediately when touched with something. So, you also should observe their movements to select the healthy one.

Freshwater clams are generally between one and two inches in size, although they can be larger. You should look for a freshwater clam that has a thick shell and ridge texture on the exterior, also shells that are cracks splits, and other deformities free.

Freshwater clam’s shell color ranges from dark brown to tan and they often have black stripes or subtle designs like this. Sometimes they are covered with green algae.

Having plants in your pond water will ensure the food supply for freshwater clams. Sometimes just floating edible things are not enough for the freshwater clams, you need to supply calcium-enriched tablets or pellets, algae wafers, fish flakes, etc to feed them.

Do not over-feed your freshwater clam as it will damage the water quality of your pond and it’s also dangerous for clam’s health.

Freshwater clams don’t live much longer, they can live for 6 months or more. They can get very sensitive to sudden changes and have a quick death.

Despite having a little lifespan, freshwater clams can die because of hunger, sudden transportation stress, and bad water quality. You should be aware of that. 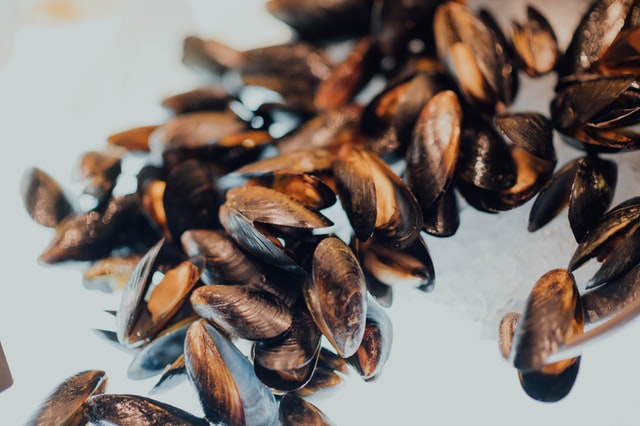 To detect whether your freshwater clam is unhealthy or dying, you need to check if their shell is opening wide, sudden ammonia spikes in the water, death of other living things in your pond or tank, water getting bad smell or cloudy.

If you suspect that the freshwater clams in your pond are dying or dead, then you need to remove them as soon as possible. Their decomposing bodies will have a very bad effect on your pond environment.

Now, if you want to add fresh water clams in ponds, you need to consider all these factors and choose carefully.

Are clams good for ponds?

The most common problem with freshwater clams the pond owners face is controlling their population. They can grow into a huge number and create a mess in your pond.

When freshwater clams build up to a huge number, they filter out algae and clean your pond’s water. By doing so, it breaks the food chain in your pond which hampers the fish growth and productivity of your pond.

When freshwater clams clean the pond water, more light can reach the bottom and enhance weed growth. Introducing freshwater clams in your pond is not the ideal solution for cleaning the water.

They do clean water by removing debris, detritus, and uneaten food from the water. It helps to maintain good quality water and lowers nitrate levels.

Where can I find freshwater clams?

Sometimes freshwater clams introduce themselves to ponds naturally and you can find them in natural canals and such. Freshwater clams are also available for sale on online markets.

Can you eat freshwater clams?

Before you attempt to eat them, you have to make sure a number of things. Freshwater clams are filter feeders that are constantly ingesting the water they in and filtering out whatever is in it. By filtering out, they accumulate various substances including toxins and pollutants in their tissues. Throughout their lifespan, they tend to get more pollutants in their body and you never should eat them raw.

So, eating clams can be dangerous to your health and should be avoided.